On arrival into the country I was flooded with emotions of excitement, doubt and joy.
It was finally time...

We boarded our train in Dandong, China. Past all of the Boarder control in China and start to see DPRK Residents. Well.. are they? In to our carriage, bunk style cabins, with a little table of a window.
We are handed our North Korean Visas.. 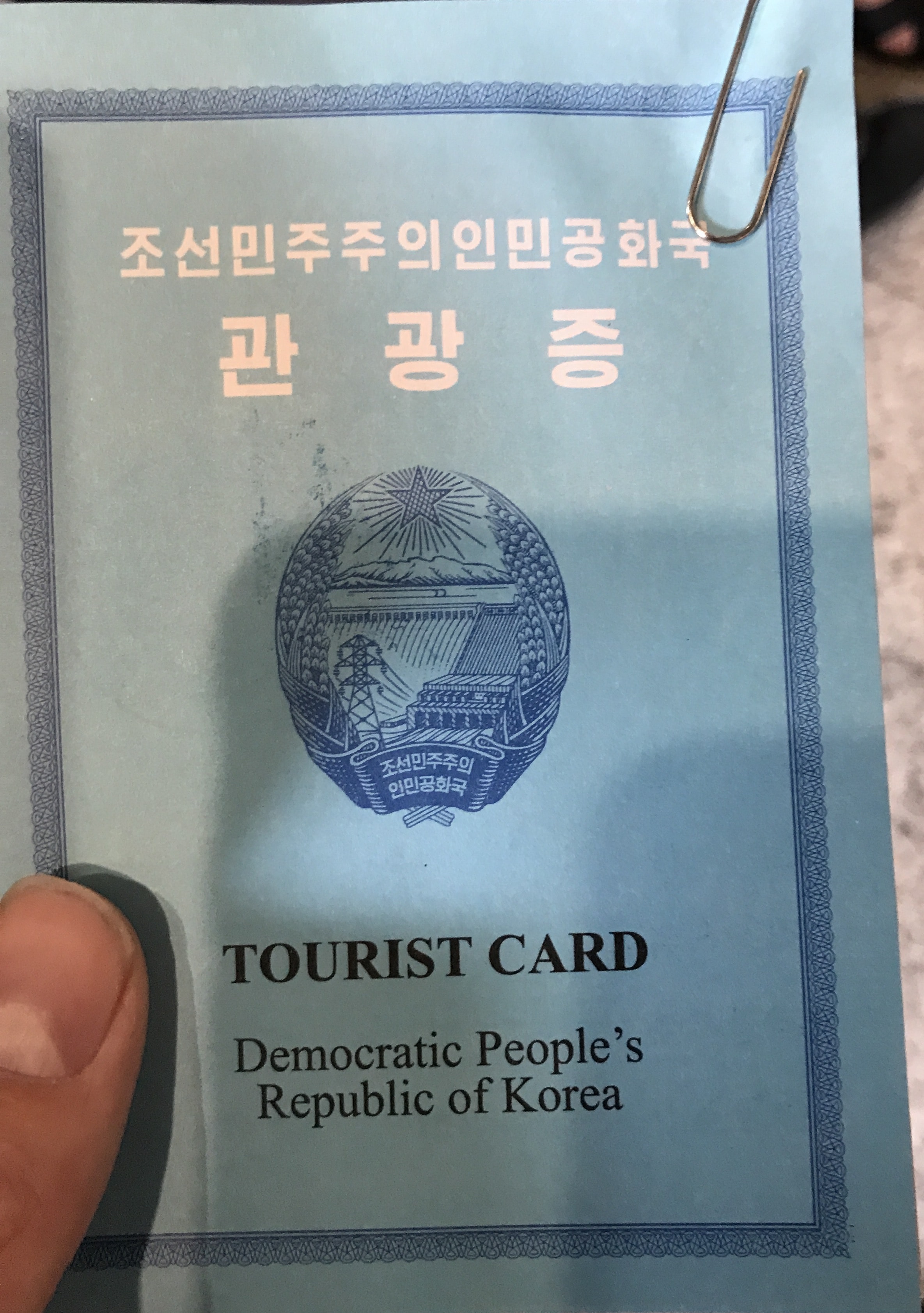 Crossing the bridge, looking out of the window you can see the difference between China and Korea, The grand structures of China and the small dilapidated buildings across the river of North Korea.
Chinese flags lining the old bridge to the centre of the river.


Looking out the window we can see the normal day to day life, a Play Park, Houses, Roads, it looks like a peaceful homely place.

Then the scenery changes, a platform, we are at a station already.. The train comes to a holt and standing on the platform are North Korean Soldiers, stood at attention saluting the train.
On the station building behind them there are two photos one of Kim Il-sung and the other of Kim Jong-il the Grandfather and Father of the current leader Kim Jong-un.
Our train is boarded in military style, we are told to hand over our passports. The soldiers are showing their 'strength' as they try to intimidate you, making you take out your phones, cameras, laptops and pointing at our bags. My camera is taken out of my bag at this point and the soldier starts looking through the images that I have taken in China.. Others have books which they look through for anything they deem unsuitable.

At this time, it was very un-nerving, I have not had this much interrogation for just entering another country before.

After all of this 'intimidation' they leave our train and we are allowed out onto the platform to buy some snacks and drinks from the stands that they have brought out.
Turning back towards the train they are adding an extra three carriages onto the back of our train.

Back on we get, and we then start to go!

Our journey to Pyongyang is ahead.


We started to explore a little bit, walking through the carriages we found a food car where we sat down and had some of the local cuisine. We notice a door at the back of this carriage that is kept shut, once we finished our food, we decided to see what was past there.
As soon as we walk towards that door, we are stopped by the train staff, we are told we are not allowed past that door.
Why??
One thing we did notice at the Chinese border control, there was DPRK Citizens, some with Green Passports others with Blue... The ones with Green were stood aside and the Blue were allowed past..
Could it be that the citizens with the Blue Passports are the "Trusted", the "Elite"??


At the back of our carriage there is one of the bunk sections where the Soldiers are sat, when at the station two young North Korean girls were placed with them.
Throughout the journey we notice that the two girls were inquisitive about us toursest, they kept looking over. As soon as we were to make eye contact with them they would instantly look away.
We finally managed to get them to engage with us. It took us to playing naughts and crossing in from of them and purposely making mistakes, they would point and laugh, saying "Nooo".
Handing the pen over to them to play.
One of the other tourists in my group Corey is an English Teacher and has been working in China for the past couple of months, he starts to go through some of his English with them and suprisiley they were able to communicate very well with us and their writing and counting (In English) was amazing!

As you can see below:

Arrving in to Pyongyang was such a surreal experience, we stepped off the train and we were instantly hit with a wall of heat and sound of music. Everyone around is looking at you, as soon as you make eye contact they instantly looked away, not looking back. Our 'local' guides are the only North Korean Citizens who communicated with us..

We put our bags onto the bus and are driven around for a mini tour of the city and finally stopping for dinner.

When staying in the city the only hotel for outsiders, located on an island, 47 stories high and a revolving restaurant on the roof top. In the elevators floor 5 is missing from the buttons but is labelled on a plaque as "Floor for communication and TV Rebroadcast". Makes you wonder what is really on this floor?

Day one of this trip; we are off to the International Friendship Exhibition Hall, located at Mount Myohang.
Inside the Exhibition Hall is over 100,000 gifts given to North Korea by various world leaders. Getting to Mount Myohang took over two and a half hours.
North Korea roads, well if you can even call them that! In the city of Pyongyang you do get some roads that feel flat but as soon as you get to the outer city limits they degrade to a bumpy hell... going out further on the highways you are going about 100kmph down concrete hell.

In the afternoon we came back to Pyongyang and went to Mansu Hill Grand Monument, which commemorates the history of the revolutionary struggle of the Korean people, and especially their leaders.
The central part of the monument consists of two 20-meter (66-foot) tall bronze statues of deceased supreme North Korean leaders Kim Il-sung and Kim Jong-il.
The monument was originally dedicated in April 1972 in honor of Kim Il Sung's 60th birthday. At the time, the monument featured only Kim Il-sung. The statue was originally covered in gold leaf, but was later altered to bronze.
Following Kim Jong-il's death in 2011, a similar statue of him was erected on the north side of Kim Il-sung. At the same time, Kim Il-sung's statue was altered to portray him at a later age and smiling. The statue of Kim Jong-il initially featured a long coat but it was promptly changed to his signature parka. South Korean sources have estimated the cost of the additional statue at $10 million, with North Korean workers working overseas being asked to donate $150 each towards the monument.

Day Two; DMZ Day.
Another two and a half hours drive, this time down to be boarder of North and South Korea; the most hostile place in the world.
Stopping at a 'service station' half way on the journey, well if you can call it a service station, a building with a few stalls outside selling, drinks, food and gifts.
We all get off here and get an 'Ice cream', never tasted an Ice Cream like this before.. Speaking with our guide they are not made from milk but an extract from rice.
Back on the bus and finally we arrive, well sort of.
We are stopped by the soldiers and all told to get off the bus, at this point we notice our local guides speaking with the soldiers and see that they hand over these mini passports to them. We ask our local guide what it was and he shows us, it is like a passport, between different areas of the country only certain people are allowed to travel around. He shows us that he has to have stamps to say that he is allowed to have "free" movement.
At this stop there are suvoineers. Where I manage to pickup a hand painted North Korean Propergander poster. They also are calling them propagander too.

Back on the bus and through the blockade to the DMZ.
First we are taken to a hall and are shown loads of pictures about the success of DPRK and how they won the war... Questions were asked about this and were instantly shutdown with North Korea winning.

We get to go and stand on the balcony of the bulding behind the blue huts, normally only seen from the South Korean side.
Unfortunatly due to this current hostilites between the two countries we are unable to go into the Blue Huts.

On our way back to Pyongyang we stop off at the Arch of Reunification, The concrete arch straddles the multi-laned Reunification Highway leading from Pyongyang to the DMZ. It consists of two Korean women in traditional dress (chosŏn-ot), symbolizing the North and the South, leaning forward to jointly uphold a sphere bearing a map of a reunified Korea.
And then finally the Monument to Party Founding.
The monument is rich in symbolism: the hammer, sickle and calligraphy brush symbolize the workers, farmers and intellectuals. The element is 50 meters high to symbolize the 50-year anniversary of the founding of the Workers' Party of Korea.
And finally to dinner before we go back to the hotel and down to the Kariokee in the basement of the hotel.

Final Day in the DPRK; Today is Victory Day, what a day… i did not expect anything that happened today…
Vitory Day celebrates the end of the Korean War in 1953, And we are off to Kumsusan Palace of the Sun, formerly the Kumsusan Memorial Palace and sometimes referred to as the Kim Il-sung Mausoleum, is a building near the northeast corner of the city of Pyongyang that serves as the mausoleum for Kim Il-sung, the founder of North Korea, and for his son Kim Jong-il, both posthumously designated as eternal leaders of North Korea.
I failed to realise that we will see the actial bodies of the dead past leaders.. it was not as expected.
Today has been the only wet day of the journey, and when I say wet it was tarrencial, so much so that alot of the dances around the city have been cancled which is a dissapointment.

After some lunch we head off to the Korean war museum and Mangyongdae Native house, Kim Il Sung square and then we take a trip on the Pyongyang Metro.

Unfortunatly this is my last night and we are heading back tomorrow.
This trip has been an eye opener, you hear so much of the struggles about North Korea but from what I have seen it seems like a normal civilised country be it that there are some struggles with what could happen in the next couple of years as more weston materials and media are making there way into the country.
This is a trip I know that I will not forget and I feel very lucky to be a select few to have visited the country.